GUY FORSYTH and members of THE HOAX collaborate in DVL and will be playing the music of The Red Devils and Lester Butler.

For touring dates check the poster below. 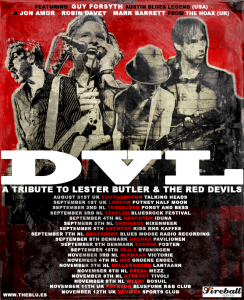 In 2013 after a brief dressing room discussion at the Bluesrock festival in Tegelen NL, Guy Forsyth joined The Hoax on stage for a riotous version of Going To The Church by The Red Devils. “We should do this again” was the inevitable discussion post show. Fast forward a couple of years and after a few emails back and forth DVL was born.

The band is a collaboration between Austin based Blues supremo Guy Forsyth and Jon Amor, Robin Davey and Mark Barrett from UK Blues Hall of Famers The Hoax. The first time these two acts shared a bill together was at that very same Bluesrock festival, and the headliner that year was The Red Devils. It was clear from that moment the impact The Red Devils had had already had on these two fledgling acts on the european blues scene. It’s testament to the brief career of Lester Butler and The Red Devils, that their music would continue to influence and inspire these acts through two decades of making music.

Guy Forsyth is an Award Winning multi-instrumentalist and founding member of the legendary Asylum Street Spankers. His powerful vocals have always formed the bedrock of his varied and eclectic musical career.

Jon Amor is a founding member of The Hoax and enjoyed continued success with his varied solo career. Nominated multiple times as British Blues Guitarist of The Year, his is revered for his no nonsense and uncompromising approach to the Blues art form.

Robin Davey is also a founding member of The Hoax. His latest project sees him taking guitar duties with California based band Well Hung Heart who were recently voted Best Live band at the prestigious OCMA’s.

Mark Barrett has been a staple of the British Blues scene for 20 years. Joining the Hoax in 1997 he has established himself as the master of the shuffle and set a new standard for British Blues drummers.

DVL will be a unique opportunity to see the music of The Red Devils – one of the most influential Blues bands of recent years, honored with authenticity, flair and uncompromising energy.